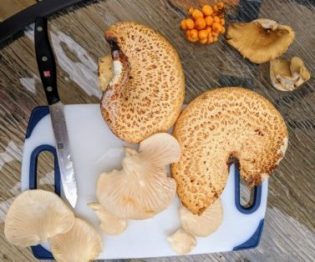 With a few hours to kill in Michigan earlier this spring, I headed out to scope some new territory. While I was hoping to add to the small, aged morel cache from earlier in the week, I settled instead for a few oyster mushrooms and dryad’s saddle, also known as pheasant backs.

Pheasant backs are interesting. They have both the aroma and a slight flavor of cucumber. Since I don’t like cucumber (but love pickles, go figure) I wasn’t entirely sure I’d like them.

But, once I’d cleaned the pores off the bottom and sliced them thin and cooked them the taste didn’t bother me greatly. I can imagine they’d be tasty pickled.

Still, my last attempt at pheasant backs was mediocre. I sliced them thin and sautéed then briefly, then threw them into a ramen. Unfortunately, they were too green tasting to suit that dish, or to suit the broth I was using. So, on this night, I sautéed both the oysters and the shaved pheasant backs with butter and a hint of garlic and some soy sauce instead.

The results were terrible. While the oyster mushrooms were perfect, delicious, and assumed some of the umami flavors of the soy, the dryad’s saddle did not fare so well. To be edible, pheasant backs must be shaved thin and, ideally poached or cooked in water, as The Forager Chef advises. What I got out of my sautéed pheasant backs was tin-metal tough. I think eating leather would have been better.

So, dryad’s saddle one; this forager, zero. At least the oyster mushrooms were tasty.