Stuffed Morels: Out of the Wildfire and Into the Oven 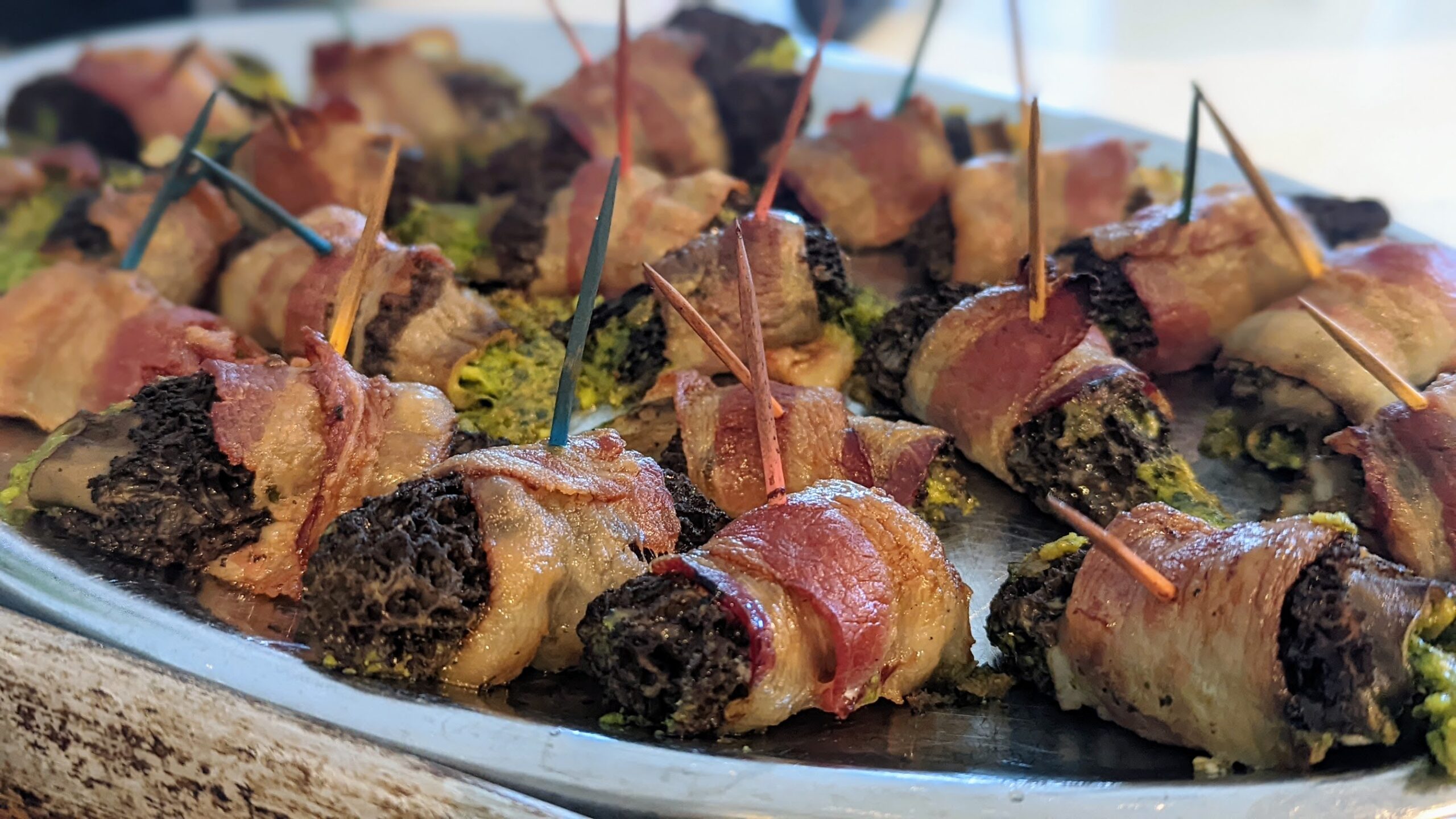 Five days of hunting burn morels in Montana in July alongside Trent and Kristen Blizzard of Modern Forager as well as Jay, Tom , and Jon from the Colorado Mycological Society led to an absolute bonanza of morels. We found them thick and fast, and so plentiful that I was giving them away in multiple pounds en route back to Michigan.

The morels we found were incredible: dense, firm, and not at all buggy. The ones that really shone were the Morchella tomentosa. Dark grey, and found in burned conifer forests, they’re covered in a near imperceptible fuzz when young. We gathered them incredibly fresh out there in last year’s American Fork fire.

Many of the morels I brought home were huge, so when my parents invited me to a dinner party with their friends, I knew what I had to do: stuff some tomentosa, wrap them in bacon, and bake them in the oven.

This stuffed morel recipe is one my Seattle foraging partner, Jim, and I developed a decade or so again. When I told my uncle about it back then, he accused me of gilding the lily. Indeed. I’m writing now about hunting burn morels, and morel hunting in general, for Northeastern University’s Experience magazine, and I’ll share that story once it’s out. For now, here’s that stuffed morel mushroom recipe. Quantities are estimated so feel free to riff.

Place cream cheese and shallot in a food process and pulse to combine. (Note: You want just a hint of shallot, not so much that it overpowers the morels.) Add in handfuls of spinach and blend until you get a speckled mix. Don’t puree.

Dice large shrimp or barely cut smaller bay shrimp. Add shrimp and parmesan to cream cheese and spinach mixture and stir well to combine. (You could pulse this in the food process, but be wary of pureeing the shrimp.)

Place stuffed morels on a cookie sheet and bake at 400 degrees F for 30 minutes, or until done.

How to Stuff Morels

There are two options here. I think the first works best.

Slit and Stuff: Pare away part of one side of a mushroom, keeping the stem intact if possible and reserving the cut piece. Push the cream cheese mixture into the morels, then cover with the trimmed piece.

The benefit of this method is that it allows you to look for any extra protein that might be hiding inside the morel.

Pipe and Stuff: Using a piping bag or ziploc with the end cut off, squeeze the cream cheese and spinach mixture into large morels through the hole in the stem.