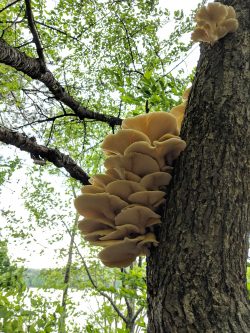 Do oyster mushrooms grow on the same tree over multiple years? In fact, they do.

Back in May of 2018, I’d been looking for morels in Mills Norrie park, on the Hudson River’s eastern bank, when I ran into two couples in the woods. It was clear they were doing the same thing I was: looking for morels. We chatted briefly, then went our separate ways.

The morel hunting was bunk. Even though I’d been told the park had once delivered a good stash for a friend several years back, I wasn’t finding any. Still, a couple of hours in, I came upon a tree that was absolutely covered in Pleurotus ostreatus—oyster mushrooms. And that’s when Melissa and Kelly, Leslie and Akiva happened by. So, I called them over and together we spent a good chunk of time happily harvesting those oyster mushrooms.

Amazingly, a few months later I stumbled into Melissa and Kelly again, at another park, hours away from our first meeting, but that’s another story for another time.

We’ve stayed in touch over the year, and today that very foursome was up in Mills Norrie again and happened by our oyster tree. The tree had come down since we first saw it, which is no surprise given oyster mushrooms are saprophytic: they belong to the class of mushrooms that act as decomposers. Also included in this category are things like maitake and shiitake. Oysters are typically found on dead wood, but they do sometimes also grow on trees that are dying but still standing.

If it was dying a year ago, the tree is dead now and fully toppled. And yet, those oyster mushrooms returned. This year, the tree was covered in about as many oysters as we harvested last year.