The Ramps of Allegheny 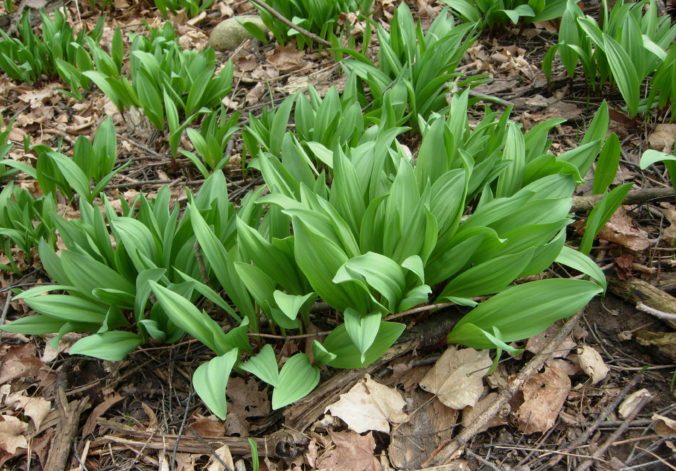 I leave NJ in a tremble of excitement. I leave NJ in a driving in rain. I’m headed west, it’s spring, and the maps I watch and the mushroom groups I follow all indicate that Michigan is on the precipice of morel season. I pack my bags—no nice clothes, just jeans for the evening, a rain jacket, bright polypropylene layers, my fat hiking pants because I can’t fit into the skinny, tougher hiking pants. I throw my books in my foraging bag and head west. West toward the hunting grounds of my youth. West towards the great lakes. West towards my father and aunt who love morels nearly as much as I do, without the fervent passion for hunting them.

Morels are special. In the United States no other mushroom seems to bring out so much passion. On Facebook I belong to three separate foraging groups dedicated to morels: MorelHunters, Michigan Morels and Morchella Connection. What makes morels so special? Is it the finding of them, or their flavor?

I’m not headed straight to Michigan. My plan is to forage along the way. I have my hunting spots starred on digital maps and I’m also planning to make it up as I go. There are places I long to forage in Pennsylvania: along the Delaware Water Gap, again. On state lands north and south of I-80; maybe even the forest near State College where I met the PA Mycological Society when I moved across country in the fall. There I found my first Hen of the Woods—aka maitake. The rain, which is coming down in unrelenting torrents, prevents me from stopping. So, I turn up the radio and drive.

By the time the rain has slackened I’m two-thirds of the way across the state and turning north towards a National Forest.

It’s odd these midwest and east coast national forests. Enter a National Forest in the Pacific Northwest and that’s about all you have: forest. But here, national forests are interlaced with towns. In Virginia, near Shenandoah National Park, the Forest I tried to hunt was dotted with homes. Following FS roads led not to a trail or underbrush, but rather to driveways. Allegheny State Forest and Allegheny State Park are similar, but different. Here, small towns rise along the asphalt at the Parks’ edge. Within the Park there are conference centers, hunting cabins, even a restaurant/bar/hotel. That’s where I’m headed.

I’ve set my destination as the Westline Inn, in the northeast quadrant of the Forest, for the night, but I take the long way through the park. For some reason, I’m too lazy to brave much of the rain in the forest, light as it is now, and instead mentally mark spots that seem ripe for foraging instead. I let the digital maps lead me, getting annoyed only when they try to reroute me to a faster route. No, I think, I want the slow way. Give me the forests and the flowering trees. I want to see what’s out there.

For this reason, from deep within the forest, I miss my final turn for Westline twice. I hadn’t expected that the Inn would be down a forest road, but that’s where the mapping software takes me. It’s a dirt road, a well-worn two-track and when I make a wrong turn again, divine providence strikes. From the corner of my eye I see the telltale dagger shape of ramps. I pull over, step out in my blue jeans and fancy ankle boots, and clamber halfway up a tiny slope. I grab the first leaf—green leaf, purpling stem diving into wet dirt—and pull. Up comes the white bulb, the tentacles of root, and with it the pungent sent of onion. I’m giddy with delight. I’ve found those wild onions and wild garlic elsewhere this spring, but these are the first true wild leeks—the first true ramps — I’ve pulled since I was just a child wandering the woods outside our front door. I pull with abandon, the roots coming up easy in the wet earth, until the slope behind me gives and I begin sinking deep, deep into mud. The car is fragrant with onion for the rest of my drive.

(Note to readers: pulling the whole thing was my error. I know cut ramps at the base to preserve the roots.)

It takes another 30 minutes before I start getting nervous. I’m down to less than 50 miles worth of gas, and I’m still deep in the forest, on dirt forest roads. What is this “inn” I’m traveling to, I wonder. What have I gotten myself into? From time to time a natural gas pump appears in a hollowed-out nook at the side of the road. Rustic, backwoods hunting cabins are set back in the trees. I’ve begun to worry. In my mind’s eye, the inn has become a two-story hunting cabin, the door to my room will be a hollow plywood piece that will lock with a simple pushbutton. My imagination runs. In it, I’m the only woman in the joint, it’s dark by the time I arrive, and the smell of beer and too-worn shirts will surround. I had no clue this “inn” would be set off a dirt road, in the middle of nowhere.

Then, when I’m beginning to feel desperate, I make one more turn and suddenly find myself on old, old pavement. But, it’s pavement, and that’s a relief somehow.

When I turn another corner, I find the Westline Inn rising at the edge of a dirt parking lot and feel a little better. Handsome, well-kept older men—fisherman off the trout river just feet away—smile at me as I walk in the door, and a younger man holds the door for me. It’s a treat, too, when I check into my room above the bar and find it impeccably clean. Even if there is a rope ladder on the floor (which at first I mistake for some sort of kinky accoutrement) to serve as a fire escape.

After check-in, as I am about to head into the woods for a quick search under the last of the daylight I chat with Glen, the bartender.

“Leeks,” says Glen. “Leeks.” He touches my arm sympathetically and chastises. “You’re in leek country now, dear. And no, we have plenty.”

That’s right. I’m home in leek country. And boy, is it good to be here.